Just in case you haven’t heard, there are some people who thought it was a good idea to dress up like Trayvon Martin for Halloween this year. Of course, there are more things wrong with this than you can list. Not only is it wrong to make fun of a young man who lost his life and what many believe to be a miscarriage of justice, it also isn’t right to mock a family’s still-raw pain after losing a loved one.

But it’s actually way worse than that. Making light of such a horrific occurrence not only contributes to the idea that African-American boys’ lives have less value in this country, it also completely ignores the seriousness of the incredible odds and institutional challenges that many black boys Trayvon’s age face before they even reach adulthood.

1. Seventy-two percent of black children are born to unwed mothers.
For starters, according to a 2010 study, a vast majority of black children are born out of wedlock, and 64 percent of African-American children live in father-absent homes, a sharp contrast to the 24 percent detailed in the 1965 Moynihan Report. Althoughcritics have taken issue with how this statistic has been used with respect to the black community’s moral standing, the facts about the effects of fatherlessness are indisputable. Children who live absent their biological fathers are, on average, at least two to three times more likely to be poor, to use drugs, to experience educational, health, emotional and behavioral problems, to be victims of child abuse, and to engage in criminal behavior than their peers who live with their married, biological (or adoptive) parents. 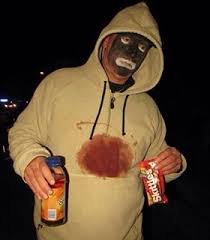 2. Black males are more likely to drop out of high school.
According to a 2012 study conducted by The Schott Foundation for Public Education, which has tracked black males from public schools since 2004, 52 percent of black males graduated high school in four years. That compared with 78 percent of white, non-Latino males and 58 percent of Latino males. Because present-day technological advances have fueled the demand for a highly skilled labor force, a high school education has become a minimum requirement for entry into the labor market. High school dropouts are more likely to be unemployed, and more likely to earn less when they do secure employment.

3. African-American boys face harsher punishments in school and are more likely to be suspended.
Not only do black males face an academic achievement gap, they also face blaring disparities in disciplinary practices. The Center for Civil Rights Remedies at the University of California, Los Angeles Civil Rights Project, released two reports in April that found 24 percent of black students were suspended in 2009-2010, compared to 7.1 percent of white students. One report found that 1 in 3 black middle school males were suspended once or more during the school year. Black and Latino students also represent more than 70 percent of those involved in school-related arrests or referrals to law enforcement, ultimately leading to a higher number of minority youths who are incarcerated.

4. One in three black males will go to prison in their lifetime.
According to the Bureau of Justice Statistics, 1 in 3 black men can expect to go to prison at some point in their lifetime. African-American males are more likely to have encounters with law enforcement and are three times more likely to be searchedduring traffic stops than white motorists. They are also twice as likely to be arrested and four times as likely to be subjected to use of force during encounters with the police.

5. Gun violence is the leading cause of death for black males ages 15-19.
Black males Trayvon Martin’s age are 8 times more likely than whites to be killed by gunfire, according to a 2012 report by the Children’s Defense Fund. In 2008 and 2009, black children and teenagers were 15 percent of the nation’s population, however, they accounted for 45 percent of young people killed by guns.

So before you head to the closest 7-11 to purchase a packet of Skittles and iced tea or buy some paint for blackface– which is an entirely separate issue of its own– remember that first of all, it’s not funny to mock a family’s pain, and it certainly isn’t entertaining to make light of the bleak circumstances affecting an entire community. These numbers prove that facts are facts. It’s not exaggerated sensitivity, it’s being aware of the world and the messages your actions send.