A Short Story – The Revisit 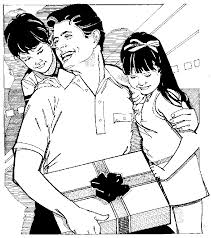 …My father was a good looking man, he was very intelligent, charming, funny, and fun…Hmm, he was inspiring. He had dark hair, brown eyes, slender body and one of the riches men in Vietnam. My mother was a lovely, elegant women; she was a breath taking type of beauty. She had long, black, rich hair, brown eyes, full lips, and such a radiant smile. She was a great woman to me and my younger sister. I remember that one moment that changed my life. It was 1975, the evacuation of Saigon, my father refused to leave his “kingdom.” My mother was trying to talk some sense into him by letting him know this “state,” Vietnam of course, has failed him. Hm. I remember hiding in our living room for days in a fortress of furniture and rubble; my sister and I would urinate in one of the maid’s cooking pot. Surviving on bread and warm water because my mother didn’t know how to cook and the help fled when Saigon fell. Days prior, my father tried to get us out of Saigon in one of his secret helicopters from one of his investors in the states. Well, that wasn’t a secret when it landed on a rooftop in the middle of the chaos and anarchy. The look on my father’s face when he stood by and watched the peasant people of Siagon ambush his helicopter.

I believe that was the moment my father was introduced to defeat. We were hostages in our home with no running electric or water. We were stuck in that hell hole when these United States pigs invaded his country. He kept telling my mother,

“He was going to protect his country and family with his heart and soul.”

Hm, the irony in that statement. While my mother, sister and I were cowardly praying to a non existing god, my father stayed at guard with his army issued machine gun pointing through the front window at anyone that approaches our home. I always wondered how my father, a business man, obtained a machine gun; maybe from his army chums he has done business affairs with in the past. He never went to sleep; he stayed at guard for days without sleep or a slight rest. I am still startled by big bangs stemming from my father shooting his machine gun at approaching people. I think he might have killed over twenty people during his watch. He would move the bodies while my mother was on watch; he’s put the bodies in the abandon neighbor’s homes. He asked me to help carry this huge fellow. Well, I was only nine, you could only imagine how strong I was at nine but the image of a dead body will never leave my mind. But hey, you’re already familiar with that already? I wasn’t, I had nightmares about that man I helped my father to carry for years. The man defecated and urinated on his self after death, the smell combination made me vomit. My father gave me such a disappointed look; he cared more about survival and expected me to me a man at nine. These were funny and dark times in my life. That one bleak day came when death dressed in a green army uniform knocked at my soul. My father hated American soldiers so he just opened fire once he saw them approaching. His machine gun shredded one soldier in half. I will never forget the outcry scream of that soldier. My mother tried to cover me and my sister’s ears but it was too late. Our innocence died when Saigon fell. More U.S. soldiers showed up and opened fire on our home. Destroyed my grandfather’s artwork and my mother’s crystal set. My mind and ears went deaf to all the chaos that was unfolding around me, sister screaming, mother crying, and my father was blood thirsty and then it all stopped. A tall, African American fellow kicked in our backdoor and came into our home shooting.

He struck my father five or six times in the chest, right arm, and stomach. Death came limping into our living room, not with a scythe but an M-16. He towered over my father victoriously with wraith in his eyes. Laying in his own pool of blood, my father uttered his last words,

The angel of death put two bullets in his forehead. These three bullets shattered my life, watching my father’s soul leave his body like the smoke coming out of his forehead. Standing in a place of shock, quietly weeping with my mother guarding us like a lioness, she yells,

Meaning, “You fucking pig, I hope you burn in hell! Die! Die! Die!” in Vietnamese. Everything transpired so quickly after my father’s death, the man looked over at us and then his captain kicked the front door in. If his captain didn’t enter when he did that man might have killed my mother, sister and me. The image of that tall, dark chap will always remain with me until my death; especially when his captain yelled out his name,

A middle age, black hair, brown eyes, average built, Vietnamese man sits in his chocolate brown leather chair with a glass of wine in his left hand leaning into a fire that’s his fireplace. The look in his eyes is just as raging and fiery as the fire he sits in front of. He then looks up at a tall, handsome, naturally fit, spiky black hair, baby faced, dark skinned Italian man dressed in a grey suit with a white shirt, black tie, and shoes. The Italian man is very rigid and cold. The Vietnamese man says,

“I vowed to myself since that day that I will find Cory Bigglesworth to return the favor of death. When I finally found him he dies the day before I could reach him from cancer. Do you know the feeling and the satisfaction of revenge coming your way and poof! Gone with the wind. Since I can’t kill him I’ll move onto his offspring, Cory has a son, Trevor Eames Bigglesworth. I want him to suffer, the same way his father made mines suffer. I want him to know I killed him before he even knew it. Do you understand, Rococo? Make Trevor hurt for the sins of his father and please bring me one of his hands for I.D. verification. Do you understand, Rococo?”

Rococo cracks his knuckles with the thumbs on each hand with a grim smirk, he stares at the Vietnamese man with a cold, inimical gaze and says,